This title is an entry in the Little People, Big Dreams series for the very youngest children. The story is simply told and filled with illustrations. Young listeners will learn about Steve’s interests and curiosity, and how these led to his and his friend’s creation of the home computer. They will see that Steve changed the world in ways that had not previously been imagined.

The first pages mention that Steve had been adopted. I feel that perhaps a bit more (like the next page or so) could have said something about his family life. As it is, the fact just hangs there a bit.

I liked this entry in the series. However, it felt a bit like an ad for Apple to me. Nonetheless, young listeners will have been introduced to an original and an icon.

This is a sweetly illustrated book that includes pictures with labels that teach vocabulary to very young children. The pages are organized by places including the kitchen, the garden, the bath and more. In addition to naming objects, feelings and verbs are included as well. These are notated with colored dots.

This is a colorful, appealing title. It should appeal to the littlest ones and their adults. 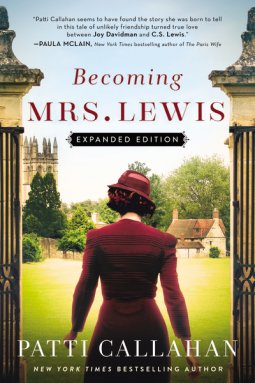 What a beautiful, complex, heartbreaking and uplifting novel this is!  I rate this story about C.S. Lewis and Joy Davidman highly.

Many people know who C.S. (Jack) Lewis was.  The first thing that often comes to mind is his children’s (Christian) book series about Narnia.  But of course he was and accomplished so much more than this.  An Oxford and later Cambridge professor, a writer on many Christian topics, a heartbroken child who lost his mother, a caretaker for a brother whom he loved deeply and a believer in four types of love.  (Readers will learn about these in reading the novel.)  C.S. Lewis was also a veteran, a person loyal to his commitments and a friend to many including Dorothy Sayers and J.R.R. Tolkien.

Joy Davidman Gresham Lewis was a child of an exacting father, a highly intelligent and well-educated woman, a wife to the dysfunctional Bil, a mother to beloved sons Davy and Douglas, a writer, editor, poet and more.  She lived her life fully and complexly.

How did these two, one British and the other American come together?  Readers learn fairly early in the novel that Joy had a profound and life changing religious experience.  This led to her writing to C.S. Lewis.  No spoilers so readers must go to the novel to learn about Joy and Jack’s uniquely evolving relationship.

The settings of the book are so beautifully evoked, both in New York and Vermont, also in London and Oxford.  Oxford, in particular, is so lovingly described that Anglophiles will truly rejoice at the sections of the book that are set there.

The full meaning and impact of the title, Becoming Mrs. Lewis, becomes deeply affecting the deeper one travels into Joy’s world.  It was a very clever name for the novel, even as it is deceptively simple.

Becoming Mrs. Lewis is published by a press that describes itself as one that publishes “stories that inspire, illuminate, and transform. Stories that captivate the imagination, enlighten the mind, and strengthen the spirit.”  They are the right ones for this title.  The novel made me think about the complexity of life choices and the meaning of many kinds of love.  It has inspired me to learn more about these two remarkable people.

I found the novel to be one that did not read especially quickly but I enjoyed the time that I spent with it.  The end definitely touched my emotions.

In this paperback edition of the book, there are many extras.  These include a map of Oxford, comments by the author, a bibliography, a timeline, discussion questions and more.

I received a complimentary copy of this book.  Opinions expressed in this review are completely my own.  Many thanks to NetGalley and Thomas Nelson for this amazing read!

She saw the world in a flower

This book provides a wonderful introduction to Georgia O’Keeffe. It is gorgeously and vibrantly illustrated and filled with details of Georgia’s life, the people that she knew, the places that were important to her and her evolution as an artist. It is geared toward elementary school age children.

This title also a timeline, glossary and a section titled “Try This Yourself.” Throughout, the author invites children to engage. She encourages them to observe their world and to paint or draw within it. Hopefully, some young readers creativity will be sparked.

I think that this book is very well done. Young artists should enjoy learning more about this woman who learned, grew and did things her way.