What makes this cookbook a bit different from others that feature French recipes is that it is bilingual. English speakers can practice (or learn) some French as they prepare these good looking recipes and enjoy all of the extras included in this title. The recipes themselves are for either main dishes or desserts. The downside of this book is that there are not very many recipes, leading me to conclude that the author’s intent was more to teach French and that recipes were a useful way to do that. With that in mind, this is an interesting title.

Treacherous is the Night by Anna Lee Huber

Anna Lee Huber began a new series last year when This Side of Murder was published. In Treacherous is the Night, the second novel featuring Verity Kent, the author hits her stride.

The reader learns early on that Verity was an agent in La Dame Blanche, a resistance and intelligence group, during WWI. This story has to do with events that had their origin in that time.

At the beginning of the novel, Verity, although not a believer, attends a seance with a friend who hopes to contact her brother. For those who don’t know, attending seances was common after the war. The medium appears to channel an agent with whom Verity worked during the war. From this point on, the novel is a hunt for clues to find Emilie and to prevent a tragedy. While the reader assumes that, since this is a series, Verity will survive, the author should be credited for creating suspense in her narrative.

There is a reason to read the books in order. SPOILER: This has to do with what happened to Verity’s husband, something the reader learns in the first novel. However, if the reader is willing to move forward, there is no reason that this novel cannot be read first.

I gave This Side of Murder three *** and am happy to give the new novel four. I enjoyed spending time with the main characters in this book and look forward to meeting up with Verity, Sidney and the rest of the crew in the future.

Thanks NetGalley and the publisher. 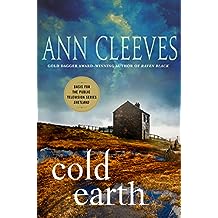 Here is the penultimate book in one of my very favorite series, the Jimmy Perez novels by Ann Cleeves.  I am so sad to know that the next book, Wild Fire, will be the final one.  In Cold Earth,  a mysterious woman is, yes, mysteriously murdered on the island.  She is discovered following a landslide and the funeral of a character from the first book, Black Raven.  Who was she?  What are her connections to Shetland and the people there? Who wanted her dead?  The plotting is intricate and the story is involving.  Jimmy and Willow, an investigator from off-island meet up again and the reader becomes involved in their relationship.  There are romantic developments for the under confident Sandy as well.  This book is definitely one to be savored.  If you have not read this series, do so.  The characters grow and develop and the reader cares  about them.  The books in order are:

Murder in a Scottish Shire by Traci Hall 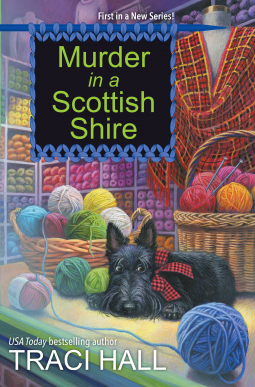 This is the first entry in what, I think, will be a series.  The things that I loved most in this cozy mystery were the setting, the characters and the knitting.  The story takes place in a small Scottish town that, aside from murder, sounds like an idyllic place to live.  The protagonist, Paislee, is surrounded by family and friends.  She runs Cashmere Crush, a friendly shop, for wool and knitting.

As often happens in mysteries, there are two murders.  As an amateur, Paislee annoys the detective but…of course, finds the killer.  I was pretty sure that I knew who this was and I was right.  There is a clue that really points to the perpetrator.

This is a good book if you just want something easy and distracting.  There is Scottish dialect which tries to add authenticity but can also be distracting.

The Girl’s Guide to Building a Fort

This is a book that will encourage young girls to think, explore, have friendships and be independent. What more can we hope for as a gift to the girls that we know? This title is broken down into a number of Let’s Be sections including scientists, trailblazers, athletes, artists, builders and chefs. It seems like a collection of all the best sorts of girl scout badge activities with each section including a wide variety of ideas. I so wish that someone had given me this title when I was young! But wait…I can still try some of these things out and you can too.

Many thanks to NetGalley and the publisher for this nicely illustrated book. All opinions are my own.

Good Company is an absorbing novel that follows four intertwined lives and the lives of those around them. The title refers to an acting company in which some of the protagonists are involved and, of course, also could refer to who enjoys spending time with whom.

Flora and Margot met when they were both starting their careers. They know a good deal about one another but there is also at least one big secret waiting to be revealed. Margot, for much of the novel, is a doctor on a long running tv series, while Flora has opted to spend more of her time doing voice overs so that she can spend more time with her precious daughter Ruby.

Flora is married to Julian an actor and one of the company managers. Margot is married to David. His medical career was upended and reinvented.

The novel covers a number of years and moves back and forth seamlessly. The story unfolds on both coasts and also in Europe for a bit.

As the blurbs for this book note, Julian’s wedding ring takes on a great deal of importance in the novel. Its history and whereabouts becomes a theme that involves the primary characters.

This novel offers a well told story and nuanced characters. The lives of the actors, their choices and stresses, feel authentic. I definitely recommend this title.

If one judges a book by its cover, it seems pretty clear that this title should be fun. Just look at the characters; their names are sure to make adults smile.

I loved the imagination of this author. Just think, every chicken tucked in its own bed and even some with bathrobes! The plot has to do with a competition, the most important event of the year. But, horrors (!), who is hen-napping the contestants and why? Luckily, witch, Miss Henrietta is on the case.

The illustrations are whimsical and fun. My only quibble is that children may find the final twist a little confusing.

Sweet Cherry has published a number of illustrated classics that are adapted for the younger reader. The latest of these titles is The Hounds of the Baskervilles. As is true of the other books that I have read in the series, this one captures the essence and feel of the longer work. It also includes information on words, for example, hansom cab, that may be unfamiliar to today’s readers. Hopefully, this version of the story will inspire children to read the original when they are ready.