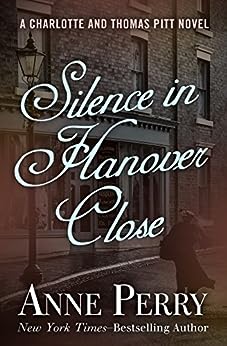 Those of you who read my blog already know that I love Anne Perry’s historical mystery series.  Thanks to NetGalley, I am currently reading Dark Tide Rising, the newest Monk title.  The book comes out in September.  I can already tell you that it is very good, raising many issues about love and loyalty.  But…in the meanwhile these two Anne Perry novels are currently out as bargains.  Discover a very enjoyable series or add to your collection.

From Publishers Weekly on Silence in Hanover Close

Inspector Thomas Pitt, Anne Perry’s gentle and astute hero of eight other Victorian mysteries, assumes a secondary role in this complex, gripping and highly satisfying mystery. High officials in the Foreign Office wish to reopen the unsolved murder case of one of their diplomats, Robert York, and Pitt is reluctantly chosen by Supt. Ballarat, his arrogant and ambitious superior, to head the investigation. Ballarat is fearful of offending powerful friends, so he cautions Pitt to be thoroughly discreet, thus rendering him ineffectual. Charlotte, Pitt’s able wife, decides to aid him by exploring the upper levels of society that are closed to a police inspector. Skillfully assuming the role of a country girl with breeding and money, she befriends key figures in the York murder: Veronica, the stunning yet fragile widow, and Loretta, York’s steely and self-contained mother. Emily, Charlotte’s titled and wealthy sister, carries the investigation a step further by hiring on as Veronica’s ladies’ maid, where, her real identity unknown, she is able to eavesdrop on both upstairs and downstairs gossip. The mystery is an adroit blend of thick London atmosphere and a convincing cast, mingled with the complex and straitlaced conventions of Victorian England. A bonus is a totally surprising yet wonderfully plausible finale.
Copyright 1988 Reed Business Information, Inc. 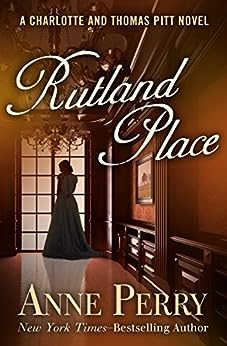 From the Inside Flap

“When Anne Perry puts Thomas and Charlotte Pitt on the case, we are in exemplary Victorian company.”
THE NEW YORK TIMES
When Charlotte Pitt, well-born wife of Thomas Pitt, the police investigator, learned of her mother’s distress in losing a locket with a compromising picture, she did not know it was the beginning of several bizarre events that would end in sudden death. For hidden behind the sumptuous elegance of Ruthland Place were terrible secrets. Secrets so horrifying that only murder could conceal them. And only the dogged persistence of Charlotte and Thomas could reveal them…. 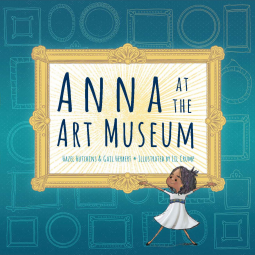 Have you ever tried to visit an art museum with a child?  Were you ever a child who found art museums to be boring?  Would you like to find your own adventures in a museum, even if they create some chaos?  If any of these could be true, read this picture book to a child in your life.  As an extra bonus, there are reproductions of famous artworks in the story with a chance to learn more about them and the artists.  A clever book and one that is well executed with enticing illustrations. 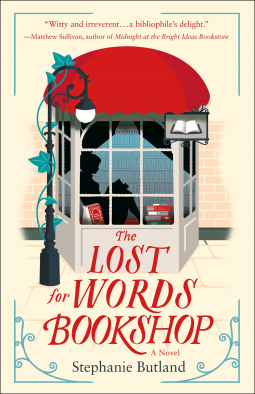 When I saw the cover for this book, I thought that it would be a typical, light, women’s fiction read. That is not the case at all! This book is much more than that. Protagonist Loveday, who does work in a bookshop, is a unique, idiosyncratic, hurt young woman who does not trust easily. There are reasons for this as the reader learns. She is tattooed with quotes from her favorite novels, has a painful backstory, is bright and someone the reader hopes for. All of the characters from Nathan, to Rob, to Annabel, to Archie, to Loveday’s family are vividly portrayed and each has an important role in her life. This book is definitely worth reading in my opinion. I was inspired to look for the author’s other novels upon completing this. Thanks NetGalley and St. Martin’s for this excellent read.

Early Bird Books is having a huge e-book sale.  It is a site worth looking at.  I found a number of mysteries to buy.

This was the first book that I read by Jojo Moyes who, of course, went on to write Me Before You, Me After You and Still Me.  I enjoyed this novel with its dual narratives taking place in 1960 and 2003.  The 1960 story centers on a lost love letter, its author and its intended recipient.  In 2003, the protagonist is working out her own love story.

Kirkus Reviews calls the novel, “a prize-winning, cross-generational love story of missed connections and delayed gratification [that] hits a seam of pure romantic gold. . . . A cliffhanger-strewn tale of heartache in two strikingly different eras [and] a tour de force.”

Praise from Paula McLain, author of The Paris Wife and Love and Ruin:

“Crafting a love story that feels not just compelling but true is a very difficult thing indeed—and yet, with The Last Letter from Your Lover, Jojo Moyes has done it twice. I found myself utterly transfixed by both sets of lovers in this marvelous novel. Moyes is a tremendously gifted storyteller, and I’m all admiration.”
—Paula McLain 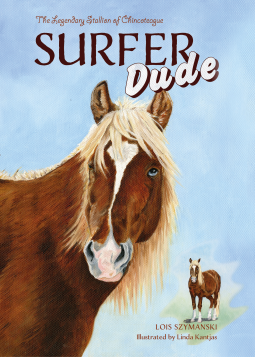 This is a very touching and moving book for children and their adults that is basedon a true story.  I rate it highly!  The illustrations are warmly appealing and add resonance to the story.  Lois Szymanski tells the reader about Surfer Dude, one of the Chincoteague ponies.  Those who know Chincoteague may have read books like Misty of Chincoteague.  For those who don’t know, Chincoteague is a special place where wild ponies live.  In this book, the reader watches Surfer Dude from the time he is named as a pony until he dies twenty-three years later.  The depiction of his death is quite beautiful and is well incorporated in the story.  The reader comes to care deeply for Surfer Dude and his family.  There are several resources in the book; one about the wildlife on the island while the other is about the ponies and names and talks about many of them.  I give this book a five star ***** rating, something that I do only rarely.  Read it!

Thank you NetGalley and the publisher. 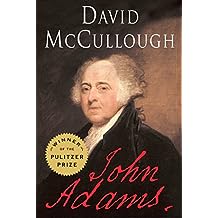 I found this biography to be insightful and easy to read (for a long non-fiction work).  The life and incredible times of the Adams family are well depicted.  One fascinating thing in reading this book is remembering that Adams, Jefferson, Franklin & Co. did not know how the Revolution would end. I take comfort in knowing that in these uncertain times.

Here a preeminent master of narrative history takes on the most fascinating of our founders to create a benchmark for all Adams biographers. With a keen eye for telling detail and a master storyteller’s instinct for human interest, McCullough (Truman; Mornings on Horseback) resurrects the great Federalist (1735-1826), revealing in particular his restrained, sometimes off-putting disposition, as well as his political guile. The events McCullough recounts are well-known, but with his astute marshaling of facts, the author surpasses previous biographers in depicting Adams’s years at Harvard, his early public life in Boston and his role in the first Continental Congress, where he helped shape the philosophical basis for the Revolution. McCullough also makes vivid Adams’s actions in the second Congress, during which he was the first to propose George Washington to command the new Continental Army. Later on, we see Adams bickering with Tom Paine’s plan for government as suggested in Common Sense, helping push through the draft for the Declaration of Independence penned by his longtime friend and frequent rival, Thomas Jefferson, and serving as commissioner to France and envoy to the Court of St. James’s. The author is likewise brilliant in portraying Adams’s complex relationship with Jefferson, who ousted him from the White House in 1800 and with whom he would share a remarkable death date 26 years later: July 4, 1826, 50 years to the day after the signing of the Declaration. (June) Forecast: Joseph Ellis has shown us the Founding Fathers can be bestsellers, and S&S knows it has a winner: first printing is 350,000 copies, and McCullough will go on a 15-city tour; both Book-of-the-Month Club and the History Book Club have taken this book as a selection. 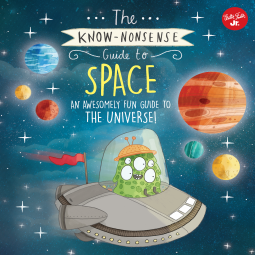 A great book for children (and their adults) who would like to understand more about planets, solar systems, galaxies, comets, asteroids and black holes, to name just some of the topics covered in this introduction to astronomy. With colorful, amusing, pithy and relevant illustrations, this book teaches a lot in a fun way. A few things that I learned…the sun makes up 99 per cent of the solar system’s mass; Venus is intensely hot and Earth is like baby bear’s porridge (see the book to find out why). Learn more about astronauts and what the International Space Station is like. An easy to look at book that young readers will be able to use as a solid reference. 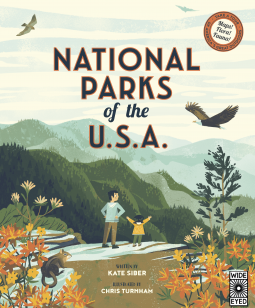 This is a pub day re-post.

Are you planning a summer vacation? Are you staying in the U.S.? If you are, think about visiting a National Park. This book will make you appreciate the rich natural heritage of our country.

Did you know that the National Park Service began under Ulysses S Grant? That is just one interesting fact that came from this book for children and their families. Divided by geographical regions and parks within each area, this wonderful book highlights when each park was founded, where it is located and what can be seen there. The illustrations are so appealing that the reader definitely enjoys exploring in this book. Highly recommended for travelers both real and armchair.

A re-post but I will say again that I loved both this and The Lido.

Dear Mrs. Bird is an engaging and warm first novel. Readers who enjoyed The Guernsey Literary and Potato Peel Society are almost certain to rate this book highly. Mrs. Bird is an out of touch editor at a woman’s magazine during WW II who is responsible for the agony column. Sadly, she deems most letters “unsuitable” for answering. Enter Emmy; young, naive, and trying to cope with bombs and disasters in London. She begins to answer letters as Mrs. Bird and you need to read the book to learn what happens. This novel at first seemed like it would be light but it has substance. Themes of love, friendship and how to relate to others all have their place. I highly recommend Dear Mrs. Bird! I would like to write her a fan letter. Thanks for this read NetGalley.