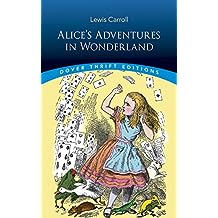 We began talking about Alice this week with the discussion to be continued over a few more classes. The professor began by speaking about the controversy surrounding the author’s life and relationships.  Nonetheless, she stated that the book is seminal in the history of children’s literature and should be studied.  Alice in Wonderland was a story told to three girls who were on a boat with Dodgson (Carroll’s real name).  One of the girls, Alice, begged him to write down the story…eventually it was published.  This was the first children’s book to be told with an understanding of a youngster’s point of view.  It was written to entertain and did not have a moral, as did all of the fairy tales that we read.  The cleverness of the illustrations was noted as well; for example, some of the text takes the shape of a mouse’s tail.  This is a story of magic, unreality and fun.  Try it if you did not read the novel when you were younger or read it to a child you know.