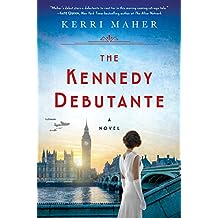 Critical Praise for the book:
“You will be swept up, first and foremost, by its vivid, captivating heroine. Kick Kennedy was naive and privileged, to be sure, but in Maher’s masterful portrait, she is also a bold young woman living at a precarious moment in history, eager to make her mark on the world as fearlessly as she will follow her heart.”—Julia Glass, Author of A House Among the Trees and the National Book Award–winning Three Junes

“Maher’s assured debut, set against the backdrop of World War II, explores the life of JFK’s younger sister Kathleen “Kick” Kennedy…This immersive, rich portrait of a complex young woman from one of the world’s most famous families will hold readers in thrall.”—Publishers Weekly

One thought on “The Kennedy Debutante by Maher”