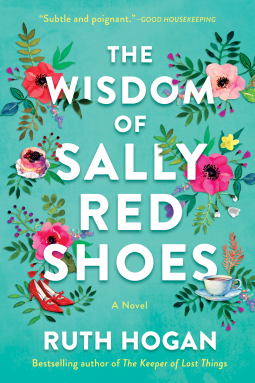 This is author Ruth Hogan’s second novel. I was quite moved by it and plan to read her debut, The Keeper of Lost Things. She has a talent for describing characters who are fully human, quirky and both struggling and trying their best.

The novel is about two women and those they know, love and/or have lost. Masha is a mother whose child disappeared a number of years ago and, although not found, was presumed to be dead. Masha has grieved for him and has struggled to progress in her life. The reader observes as she moves forward bit by bit, fortified by new and old relationships. Part of Masha’s story takes place at the lido, a favorite locale for me after reading Libby Page’s novel. As in that novel, swimming yields some peace.

Then there is Alice. She is a mother who is overprotective and very attached to her son. Her backstory is told with compassion and the reader comes to understand her struggles and decisions.

Sally, herself, is a elderly woman whose past history becomes known late in the novel. She is eccentric and a source of some of Masha’s healing. She reminds Masha of the importance of continuing to dance, both literally and metaphorically. Other characters include Kitty who has overcome her own tragedy.

While characters in this book have experienced loss, the story is not depressing. Ruth Hogan writes empathically and I was sorry when the novel ended. There is a twist that you might see coming but, even if you know, you can enjoy reading about it.

Many thanks to NetGalley and the publisher for this e-galley. Ruth Hogan is an author to watch!

Praise for The Wisdom of Sally Red Shoes:

“Warm and wise… With her bestselling 2017 debut, The Keeper of Lost Things, Hogan won fans for her astute portrayal of grief and the human capacity for recovery. It is territory she revisits here, adding to her themes that of community and its power to heal. Her passages on loss are vivid and visceral… But hope is never lost and catharsis is to be found in unlikely places.”
―The Guardian

“This is a work that packs in plenty of substance alongside the sweetness… Despite tackling such huge topics as bereavement and cancer, Hogan’s work is filled with hope and the power of friendship.”
―“Best uplifting books to read this summer,” Evening Standard

“We were huge fans of Ruth Hogan’s The Keeper of Lost Things, and her second book is just as brilliantly written―though you may need tissues at the ready!” ―Sun

“From the author of breakout hit, The Keeper of Lost Things, this is a book to really love… Hogan writes welcoming prose that makes reading a joy.”
―Stylist

“A novel that looks at how to live life to the full, even if you have suffered tragedy.”
―The Daily Mail