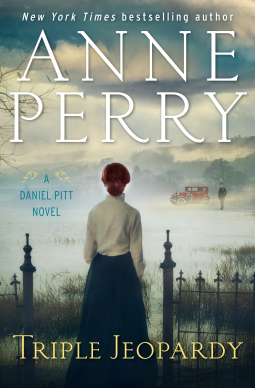 Anne Perry is a prolific writer of British historical mysteries. She has written series including the Thomas and Charlotte Pitt novels, the William Monk books, a series set during WWI and the Christmas novellas.
Perry’s most recent series features Daniel, the son of the Pitts. The first in this was last year’s Twenty-One days.  Daniel, a new lawyer, is now the protagonist of Triple Jeopardy.
What I loved most about this book was spending time with favorite characters including Daniel’s parents and his sister, Jemima. Jemima is now grown up, married to a police officer and living in the States. She has two young daughters. I also was delighted to again see Miriam fford Croft.
The plot takes time to build and engage the reader as it moves to a courtroom climax. My favorite scenes, however, are the ones that take place on the small island of Alderney.
Did a young employee of the British embassy in Washington D.C. commit crimes including breaking into a young woman’s bedroom, embezzlement and murder? If he did not, who did and why? You will have to read the book to find out.
As always, I love reading anything by this author. I give Triple Jeopardy a solid four stars. 🌟🌟🌟🌟 Many thanks to Netgalley and the publisher for a very good read. All opinions are my own.