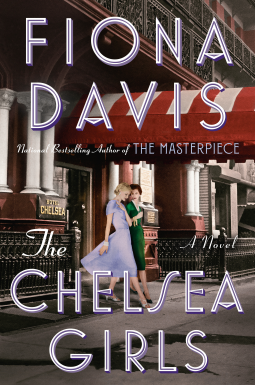 Fiona Davis sets her novels in iconic New York City locations. She has told stories set at the Barbizon Hotel for Women, The Dakota, Grand Central Station and now at the Chelsea Hotel. In each of her three prior novels, the narrative took place during two eras; in this book, the author follows two characters in the same time period. They are actress Maxine and would be actress and playwright, Hazel.

The novel opens with Hazel joining a USO troop in Italy during WWII. These scenes were so evocative, both in terms of the war and the emotions raised for the performers. This beginning left me feeling very excited about the rest of the book except…for a while, I then found the narrative less engaging. However, round about chapter 18 there was a twist and I again became very involved in the story and the characters’ lives. It is worth sticking with the book in my opinion.

Much of this book centers on the activities of HUAC, the House Un-Amercian Activities Committee. Who is a Communist? Who is being targeted unfairly? Should we be rooting people out and encouraging them to turn on others? What are the consequences to everyone when a government sponsored witch hunt is going on? You will think about these issues as you read and may also find the subject relevant in our current political climate.

In addition to HUAC, the reader spends time at the Chelsea Hotel, the Tonys, on Broadway and more. There are actors, government workers, names dropped of famous and real Chelsea Hotel denizens and more. Most of all, readers will connect with Hazel and Maxine, their friendship and its challenges.

All in all, this was a good read. Thanks to NetGalley and the publisher for my e-galley. All opinions are my own.