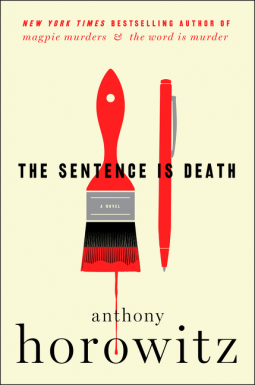 In The sentence is Death, second in the series which began with The Word is Murder, the author inserts himself as a character in his fiction. Tony, aka Anthony Horowitz, is Watson to Daniel Hawthorne’s Sherlock. Like Watson, he theorizes but is not as clever as his mentor. In the novel, the conceit is that Mr. Horowitz is writing a series of books about Inspector Hawthorne’s cases.

In this entry, a divorce attorney is murdered. There are numerous suspects including clients involved in an acrimonious divorce. But…the murder may also be related to a past friendship and a tragedy that occurred while caving. Characters stories are developed sufficiently to give the reader a good sense of them. Suffice it to say that several plot lines are followed, there are a number of viable suspects and eventually the case is solved.

As a fan of some of the author’s TV work, I enjoyed the references to Foyle’s War. There is also information about publishing which lends authenticity. I enjoyed this book and will most likely go back to read the first in the series.

Many thanks to NetGalley and the publisher for this e=galley. All opinions are my own.