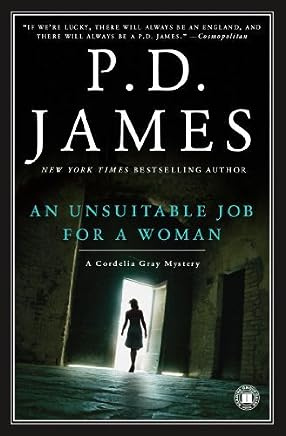 This week we left the amateur sleuth behind and moved on to private investigators (P.I.’s).  Time was spend on background regarding the male PIs, as written by Chandler and Hammett. An Unsuitable Job for a Woman features Cordelia Gray, an early female PI; she is smart, independent, a risk taker and a young woman with a back story.  I enjoyed spending time with her in this more literary novel.

Cordelia, whose partner has just committed suicide, is contacted by the father of Mark Callender, who reportedly committed suicide. Mr. Callender Sr. tells Cordelia that he would like to know why.  Her investigation leads Cordelia to Cambridge where she becomes a part of a group of Mark’s friends.  What did they know?  What does Nanny Pilbeam know?  Is the job unsuitable? Was it suicide?

I enjoyed this novel very much.  To me, it felt in some ways like the predecessor to Tana French”s The Likeness.  That is one of my favorite books.

P D James is better known for her Adam Dalgliesh novels.  In fact, Dalgliesh has cameo appearances in the book.  P D James only wrote one more Cordelia Gray novel, even through she wrote many Dalgliesh novels.  According to our professor, James did not like Cordelia all that much.  Reportedly readers wanted a romance between the two but Ms. James was not having it.  So, after The Skull Beneath the Skin, Cordelia disappeared from view.

An Unsuitable Job for a Woman introduces bestselling mystery author P.D. James’s courageous but vulnerable young detective, Cordelia Gray, in a “top-rated puzzle of peril that holds you all the way” (The New York Times).

There were so many female PIs to follow Cordelia; to name a few there are Kinsey Milhone, V I Warshawski, Sharon McCone and more.  Who are your favorites?  Do you prefer the PI to the amateur cozy sleuth?  Let me know.

3 thoughts on “Women Who Sleuth-Week four: An Unsuitable Job for a Woman”