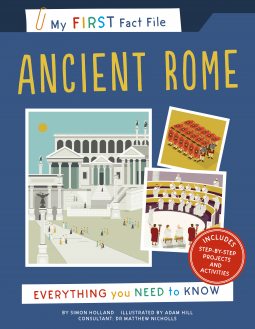 This book is part of a series, My First Fact File.  This is the first one that I have read and all indications are that these entries will be interesting and informative.

Many topics are introduced and described in two page spreads; for each, there are illustrations that enhance the text.  For example, the founding of Rome, the forms of governing, the army, the family and roles of women, entertinments, arts, food,  engineering etc.  are all discussed.  Often there is a “quick fact”  such as this one on public toilets.  Young readers will learn that there were benches that held up to 20 people.  There was no privacy but lots of time to gossip.  There are also suggested projects that will reinforce and enhance learning.  One project is to build a weapon called an onager, others are to design the placement of important buildings in the forum and to elaborate on the kind of emperor the reader would want to be.

I found this book to be easy to read, entertaining and yet also a book that will teach children a lot about an important civilization that still influences us today.  Readers will learn about the Roman Alphabet, calendar and numbers for example that are still in use.

Many thanks to NetGalley and the publisher for this book in exchange for my honest opinion.  I look forward to reading more entries in the series.  This one deserves a place in both school and home

Children respected their elders and were obedient to the father of the family. The male children of the rich were taught by tutors or in schools, but also had more time to play.

The Romans were brilliant artists.They excelled at mixing the art and architecture of other cultures into their own style and producing high-quality artworks, many of which still survive today.