Andrea Camilleri, who took a late-career stab at writing a mystery novel and came up with the Inspector Montalbano detective books, which became wildly successful in Italy and were the basis for a popular television series, died on Wednesday morning in a hospital in Rome. He was 93.

A spokeswoman for the hospital, the Santo Spirito, confirmed the death, which came a month after Mr. Camilleri was hospitalized with complications of a broken thigh bone and heart problems.

“I have an extremely disorderly manner of writing,” Mr. Camilleri told The Times in 2002. “I don’t write like Snoopy: ‘It was a dark and stormy night.’ I couldn’t start with Chapter 1.”

The experiment resulted in “The Shape of Water,” published in Italy in 1994. (It was not related to the Guillermo del Toro movie of the same title released in 2017.) The novel introduced Inspector Salvo Montalbano, who investigates crimes in the fictional Sicilian town of Vigata. That isn’t easy, since corruption is endemic there.

In the opening novel, when a local power broker is found dead in a dicey part of town with his pants around his ankles, a coroner rules that he had died of natural causes, and officials pressure Montalbano not to look further. But Montalbano is a man with a strong sense of justice and a willingness to bend rules to achieve it.

The book, published when Mr. Camilleri was 69, sold well enough to warrant a sequel, “The Terra-Cotta Dog,” in 1996, and then another, and another. In a 1998 interview with the Italian magazine L’Espresso, he said word of mouth had done the trick.

“I sold 10,000 copies because people phoned each other, and in the same way you suggest a movie, they were suggesting my books,” he said.

The series, written in a combination of Italian and Sicilian, grew to more than two dozen titles.

Mr. Camilleri was four books into it when his inspector was elevated to a whole new level of popularity by “Il Commissario Montalbano,” a television series from the Italian state broadcaster RAI that has been running since 1999. It has also aired abroad, including on the BBC in Britain. Luca Zingaretti plays Montalbano.

The Montalbano books, too, gained an international audience. The first English translations appeared in 2002 and quickly found fans, including among book critics.

Marilyn Stasio, writing in The Times that year, called “The Shape of Water” a “savagely funny police procedural.” Four years later, when “The Smell of Night” appeared in English, she advised, “For sunny views, explosive characters and a snappy plot constructed with great farcical ingenuity, the writer you want is Andrea Camilleri.”

“The Shape of Water,” published in Italy in 1994, introduced Inspector Salvo Montalbano, who tries to investigate crimes in the fictional Sicilian town of Vigata. The Inspector Montalbano books were wildly successful in Italy and were the basis for a popular television series that has been running for 20 years.CreditPenguin Random House 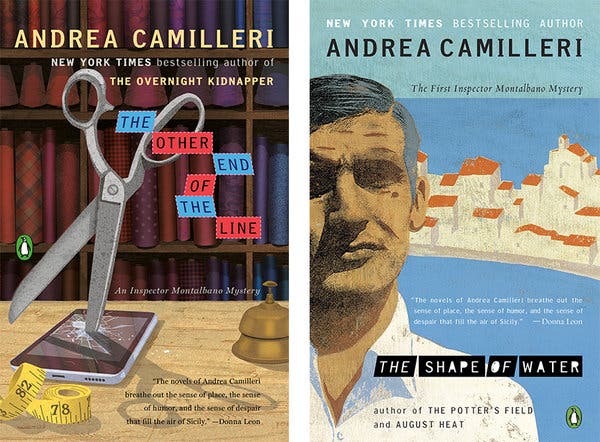 Andrea Calogero Camilleri was born on Sept. 6, 1925, to Carmella and Giuseppe Camilleri in Porto Empedocle, a town in southwestern Sicily that became a model for Vigata. (For a time in the last decade, the town changed its name to Porto Empedocle Vigata, hoping to capitalize on tourism inspired by the Montalbano books.)

His father worked for the Italian Coast Guard and, Mr. Camilleri told the British newspaper The Independent in 2007, was his model for Montalbano, a man with a certain disregard for authority, although that did not become clear to the author until several books into the series. His father, he told the newspaper, was a hard-line Fascist until the day in 1938 when Andrea told him a friend had been barred from school because he was Jewish.

“My father hit the roof, saying, ‘That bastard,’ referring to Mussolini,” Mr. Camilleri said. The connection to his famous inspector? “I’ve always tried to make Montalbano critical about the behavior and orders of his bosses, the imbecility of power,” he said.

After high school in Porto Empedocle, Mr. Camilleri earned a degree in modern literature at the University of Palermo. As a teenager and young man, he had some success as a poet. He was also involved in theatrical productions, and in 1949 he won a scholarship to study at the National Academy of Dramatic Art in Rome. He lasted only a year there but stayed in Rome, working as a stage director.

Mr. Camilleri was hired by RAI’s radio division in 1958, then switched to the television side, directing and adapting scripts. He began teaching theater at the National Academy in 1974 and continued to do so for more than 20 years.

He had begun writing novels by this point, although the first, “The Way Things Go,” written in the late 1960s, wasn’t published until 1978. Several other novels in various genres followed, though none got much attention. The best known of the pre-Montalbano books was “Hunting Season,” a comic historical novel published in 1992. He was working on another when he got stuck and tried a detective tale.

The Montalbano books are known not just for their distinctive inspector but also for a colorful array of underlings and other recurring characters. And unlike most other crime series, they indulge in occasional commentary on Italian politics. Mr. Camilleri was not a fan of Silvio Berlusconi, the longtime prime minister, and his displeasure, which he voiced in a series of essays, could be detected in the books.

“In my books,” he told The Guardian in 2012, “I deliberately decided to smuggle into a detective novel a critical commentary on my times.”

More recently, he had been outspoken about Matteo Salvini, Italy’s far-right interior minister, and his anti-immigration positions. An episode of the TV show in February that included a pro-immigrant message brought a flurry of criticism from Salvini supporters.

“Salvini reminds me of a member of the Fascist regime,” Mr. Camilleri told The Guardian in the aftermath.

Mr. Camilleri is survived by his wife, Rosetta Dello Siesto, whom he married in 1957, as well as three daughters, four grandchildren and a great-granddaughter.

Mr. Camilleri prepared years ago for the end of the Montalbano series.

“I finished him off five years ago,” he said in 2012. “That’s to say, the final novel in the series of Montalbano is already written and deposited at the publishing house. When I get fed up with him or am not able to write any more, I’ll tell the publisher: Publish that book.”