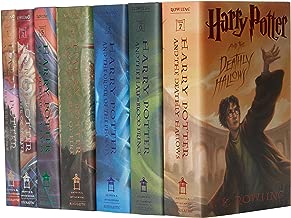 This summer one of my daughters invited/challenged me to read all of the Harry Potter books.  I am not sure what number read through this was for her but, for me, it was the first time that I have read all of the books.  Was I familiar with them?  Of course. Had I bought them all for my children, sometimes two copies so that neither would have to wait?  Had I heard Jim Dale narrate them in the background of my car rides?  Had I seen some of the movies?  Had I read some?  The answer to all of these is yes.  I thought that the first book was a perfectly formed novel that would have earned praise even if the author had stopped there. I continued to read for a while but stopped when I got the Professor Umbrage.  I disliked her so very much that I put the books down.

Well, this summer I made it past that banally evil teacher and finished all seven of the books.  I am sad to be done.  It was quite a journey.

It is difficult to say something about the novels that has not already been said.  The books are meant to be epic, about a world in which evil can possibly triumph, a world in which one group, Voldemort’s followers, wants to exterminate another, Muggles, for not being pure enough.  The books show the importance of community, friendship, doing what is right.  They demonstrate that a person can go on even if, like Harry, they lose many who are most dear to them.

This is also the ultimate boarding school story.  It is populated by professors, houses, magic, sports, teenage love, studies and angst.  All of these are familiar tropes yet J.K. Rowling makes them new again.

I recommend the series most highly for everyone from children to adults, although I think that, because of the dark nature of some of the later books, they are not meant for your first or second grader.

Have you read the series?  Your comments?