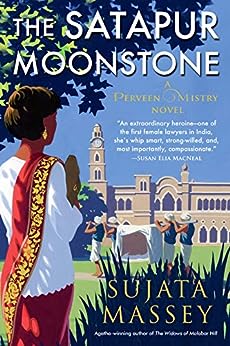 Sujata Massey is the author of two mystery series.  I highly recommend the earlier, contemporary series about Rei Shimura which is set in Japan.  In this new series, the author is telling stories set in India in the  1920s.  The first novel is The Widow of Malabar Hill.

Perveen Mistry is a rarity in her time.  She is a legally married, but separated, woman practicing law. Perveen has entree to the women who are in purdah and endeavors to serve their best legal (and life) interests.

This story is ostensibly about what the best education for a young maharajah would be.  But there is more.  There are intrigues, an affair, murder, family ties and tensions.  The reader also watches as Perveen is attracted to a British officer/diplomat for the Satapur region.

Massey tells her story well.  The book is an engaging one that should bode well for the future of the series.

“Once again Massey does a superb job of combining a fascinating snapshot into 1920s British-ruled India with a top-notch mystery. She has created a strong, appealing heroine who is forging her own path in a rapidly changing world.”
—Library Journal, Starred Review