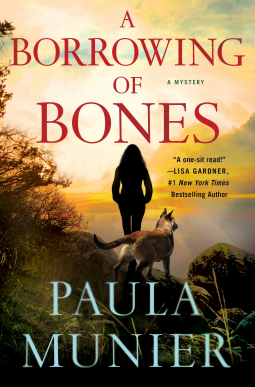 A Borrowing of Bones is the first book in a projected series by this author. The second title will be published in early November. I definitely plan to read that as well.

This novel has mysteries, murders, a great setting and some villains. It also has characters, both human and canine, with whom I truly enjoyed spending time. There is a backstory for the characters that engages the reader as well.

Protagonist Mercy was named Mercy because of the Quaker history in her family. However, her life has not been quiet and peaceful. Mercy has not followed the path that her parents set out for her. They wanted Mercy to follow in their own footsteps by becoming a Boston based lawyer. Instead, Mercy became a military MP. While in Afghanistan, she fell in love with her fiancee who was Mexican American. He has died and Mercy has the care of his well trained military dog. This is not a spoiler as the reader knows of Martinez’s death early in the story. The reader gets to know Mercy in all of her Shakespeare quoting stubabornness, intelligence and integrity.

On the other side of Mercy is Troy and his dog Susie Bear, who is named from the John Irving book. Together, the dogs and human grow close. They solve murders, thefts and ensure the well-being of a young mother and her baby.

I truly enjoyed this book. My trip to Vermont in these fictional pages was time well spent.

Comparisons may be made between Munier’s debut mystery and Margaret Mizushima’s Timber Creek K-9 mysteries. A stronger read-alike is Julia Spencer Felming’s mysteries featuring Rev. Clare Fergusson, another female veteran. The believable dogs, the touches of humor, the independent, determined Mercy, and well-crafted characters will bring readers back.” ―Library Journal (starred review and debut of the month)

06/18/2018
Retired military police officer Mercy Carr, the 29-year-old heroine of literary agent Munier’s delightful first novel and series launch, and her bomb-sniffing Belgian shepherd, Elvis, are recovering in rural Vermont from the death of the man they both loved, Sergeant Martinez, who was killed in combat a year earlier in Afghanistan. During a hike in the woods, Mercy and Elvis discover a baby and contact the authorities. Fish and Wildlife game warden Troy Warner arrives with his search-and-rescue dog, Susie Bear, and the dogs detect human remains buried nearby. When the baby later disappears from a local hospital, Mercy and Elvis investigate, with sometimes reluctant assistance from Troy and Susie Bear. Munier (The Writer’s Guide to Beginnings) allows the attraction between Mercy and Troy to develop organically, though the book falls prey to some typical first novel shortcomings, including a convoluted plot and implausible intuitive leaps. The portrayal of working dogs will appeal to fans of David Rosenfelt and Margaret Mizushima. The blend of lovingly detailed setting and lively characters, both human and canine, makes this a series to watch. Author tour. (Sept.)