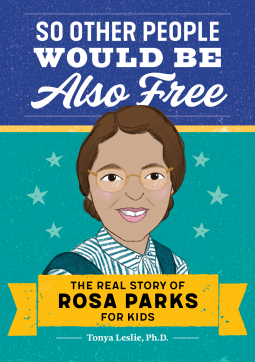 This excellent biography of Rosa Parks is geared toward 8 to 12 year olds. The tone of the book is factual and respectful of children’s ability to understand and think about difficult issues like segregation. So Other People Would Be Also Free acknowledges the country’s history of slavery and discrimination and opens the topic up for discussion via Rose’s story.

Readers learn about Rosa’s early life and family. They read about what she saw as those who were African American were treated differently from those who were white. Her activism is detailed and included early associations with the NAACP. She cared about issues long before she sat on that bus.

Rosa’s marriage to Parks and his work for the Scottsboro Boys also is recognized as are Rosa’s schooling and jobs. Of course there is much focus on the boycott. The book ends with a chapter on Rosa Parks’s life and legacy.

There are photos in the book that reflect Rosa’s time period and also some quotes from Rosa. There are also sections called “Think About It” to help encourage discussion and critical reading. For example one Talk About It states:

“The Reconstruction era mst have been an extraordinary time for newly freed Black Americans. What might have been some of their most pressing issues?”

This book could easily be part of a social studies unit at school. Whether in class or at home, it deserves a wide readership.

A Story from Rosa’s Childhood: Separate and Unequal Schools

Rosa grew up in a loving home with a family that valued education. Since her mother was a teacher, she would teach Rosa at home when the school was closed or when Rosa was sick, which was often. But when Rosa did go to class, she noticed right away that there were two very different schools: the one available for black children, and the one for white children.

The black children went to a one-room schoolhouse where there was one teacher for about 60 students. The lone teacher taught grades one through six. The black community built and maintained the school.

The white children went to a new brick school that was paid for by taxpayers. Black people and white people both paid taxes equally, yet the money wasn’t distributed equally. The white school had separate classrooms for each grade and was open nine months out of the year. Rosa walked to the school for black children, which was farther away. White children rode in a school bus.