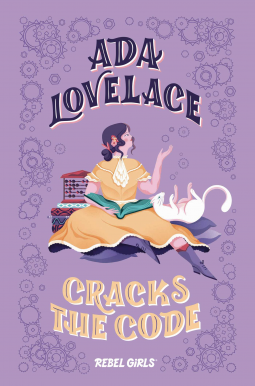 This well-researched and written book tells the story of Ada Lovelace. Ada was the daughter of the famous poet, Lord Byron, although she did not know her father well. Ada’s mother was a woman of strong opinions who had definite ideas of what she wanted for Ada.

Ada was educated by governesses in her early years. She often found her lessons boring until Miss Stamp was hired. Miss Stamp allowed Ada’s imagination to soar, despite Ada’s mother’s not wanting this. Miss Stamp and Ada read stories and did experiments, including trying to fly.

Soon after Miss Stamp was let go, Ada became quite ill and took years to recover. She then moved along the path of expectations, attending balls and eventually marrying. However, she also observed and exercised her mathematical skills. Influential thinkers with whom she spent time included Mary Somerville and George Babbage, the designer of an important precursor to the computer.

I have read several books about Ada Lovelace. This is one of the best, especially for its target audience of elementary school aged children. They will relate to Ada’s spirit and curiosity. Hopefully, readers will be encouraged to pursue their own studies and interests, even if not everyone agrees with their pursuits.

The end of the book includes a number of suggested activities and and afterword.

Many thanks to NetGalley and the publisher for this excellent, well-illustrated story of Ada Lovelace in return for an honest review.