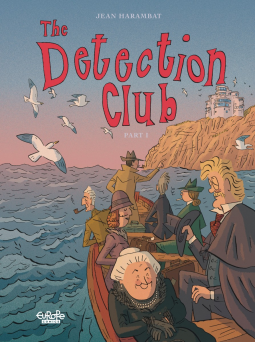 Between the wars, in the 1930s, there really was a detection club in England.  Its members included some of the best and most well-known mystery writers of the time including, Chesterton, Christie, Carr, Sayers, Orczy and more.  The group reportedly posited a number of rules for the writing of their novels.  For instance, “Twin brothers, and doubles generally, must not appear unless we have been duly prepared for them” and “Not more than one secret room or passage is allowable.”

These real writers and members of the club become characters in a fictional mystery set at the island home of Roderick Ghyll, an eccentric millionaire.  Mr. Ghyll proceeds to tell the authors that his robot, Erick, will be able to solve any mystery.

From that point the comic shows all of the authors with their own personalities and foibles.  There are also a number of authorial asides and jokes, along with a tongue in cheek style.

The mystery writers are challenged by the (seeming?) death of their host.  Will Eric solve the case?  Was Eric the murderer?  What other secrets are there?  I will not know until I read volume 2.

This comic may well be enjoyed by those who like the Golden Age of mystery.  The drawings, the sense of animation and the colors are excellent.