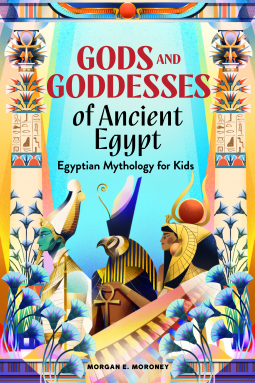 Ancient Egyptian people were deeply influenced by their gods.  The gods helped them to make sense of things that they did not understand.  One well known example was finding an explanation for why the Nile flooded each year, a natural phenomenon upon which the population depended.

This book tells the stories of over fifteen of the gods and goddesses.  They were the gods or goddesses of creation and war, the underworld, healing, mummification, love, music and celebration, knowledge and more. The end of the book includes a glossary, a “find out more” section and references while the beginning includes a map and timeline.

Many children go through a phase of fascination with mummies and all things ancient Egyptian.  This title is a great way to capture and build upon that interest.

Many thanks to NetGalley and the publisher for this beautifully illustrated boook in exchange for anhones review.

A few of the many deities in the book:  Provided by the publisher.