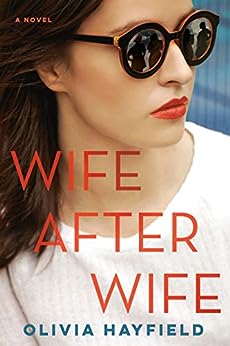 The term guilty pleasure comes to mind when I think about Wife After Wife.  It is the sort of novel that I read both enjoying it and wondering if it was not the best use of my book time.

The story is an updated version of Henry VIII and his six wives.  It is clever in its concept and characters. Harry (Henry)is the head of a firm that publishes celebrity magazines.  He is wealthy, sexy and seemingly attractive to all of the women he meets and he meets many.

In talking about the wives and mistresses the characters are clearly identifiable.  I won’t go through them all but first wife Katie has trouble with pregnancies, faces miscarriages and her only child is Maria. All much like the historical first wife.   Katie tries but is depressed.  No surprise that Harry is attracted to others and they divorce.  In one of many clever twists, Katie moves to Wales and lives at a wellness retreat.

And so it goes with modern women and wives in Harry’s life.  They are well described and there are a number of enjoyable cultural references.

This book will not offer you deep food for thought.  It is escapism pure and simple.  If that appeals to you, you might give this title a try.

3 thoughts on “Would you date this man? Wife After Wife by Olivia Hayfield”