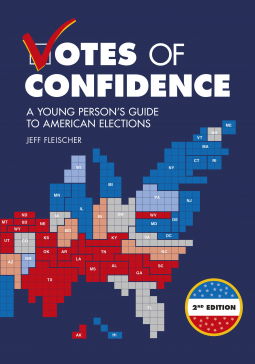 Talk about a timely book release as this title is published right in the middle of a Presidential election year.  Votes of Confidence is a thorough guide to the election process.  It is written to give students in high school a sense of what the election process and their government are about.  It could also be a great resource for adults who need a refresher for themselves or so that they can talk with the children in their lives about the United States democracy.

There are chapters on American government, how voting works, political parties and ways to get involved in the political system.   There is also an important chapter titled Voting with Confidence.

The book is factual but I do note that the author has a point of view.  Clearly noted in the introduction are Trump’s use of false information and conspiracy theories, along with mention of Russian interference in the election process.

This book looks like a valuable resource.  It is jam packed with information and much food for thought. Many thanks to NetGalley and the publisher for this title in exchange for an honest review.

“The first edition of this book was published in the midst of the 2016 election. In the introduction of this second edition, Fleischer states that it was in the aftermath of that election, amid the current climate of fake news and misinformation, that he felt it was vital to update the book so that young people are more informed about how the government works. The census bureau predicts that ‘the post-1980s generation will be 36.5 percent of eligible voters by 2020.’ Fleischer clearly and understandably explains how the American government came to be and how it’s supposed to work. He describes the three branches, how a bill becomes a law, reasons for and against the Electoral College, primaries, and national, state, and local general elections. Political parties, campaigns, debates, financing, gerrymandering, voter suppression, and ballot initiatives are covered. The text emphasizes what young people need to know to vote, where to get accurate political information, and how to become more involved in politics. Back matter includes source notes, additional resources, index, sidebars, charts, illustrations, and photographs. Fleischer avoids making the topic dry or boring by using conversational language (stinks, BS) and includes surprising facts that make this a very readable, engaging, and entertaining history of American elections and politics for young people. Highly recommended.“―starred, Booklist