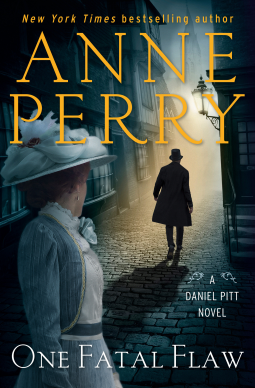 Anne Perry has been writing mysteries since 1979 when the first of her Thomas and Charlotte Pitt novels was published.  I still remember how much I enjoyed that novel’s Victorian world and its characters.  Perry went on to pen a second popular series about Inspector Monk; the conceit that carried through a number of the books was Monk’s amnesia.  Monk solved his cases with the help of a nurse and lawyer.  The author also has published a number of Christmas novellas that feature characters from these series.  For years, readers could look forward to a new book in each series every year.

More recently, Ms. Perry started two new series.  With the first Elena Standish novel, she moved to the period during which Hitler was rising to power.  Her second new series features Daniel Pitt.  He is the lawyer son of Thomas and Charlotte.  I enjoyed the first two books in the Daniel Pitt series but, for me, third time is the charm.  I think that One Fatal Flaw is an excellent read.

As is true in Ms. Perry’s other series, the recurring characters who surround the protagonist add interest and depth to the story.  Chief among these is Miriam; older than Daniel, she knows a great deal about criminology and science, although the times that she lives in do not allow her full or formal entry to the working world.  In each book, the relationship between Daniel and Miriam deepens.

One Fatal Flaw tells the interrelated stories of three cases of murder and arson.  Ms. Perry handles the narrative expertly and readers will enjoy spending time with the very decent characters as they do their best to serve justice.

I give this book five stars and offer many thanks to NetGalley and the publisher for providing me with this book in exchange for an honest review.

See my archive for reviews of a number of titles by this author.