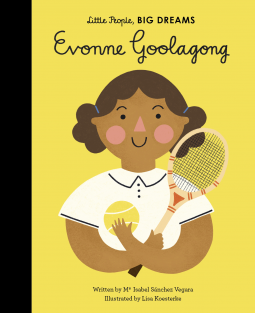 This title is yet another wonderful entry in one of my favorite series for kids. Each book features someone who had a dream and worked to make it come true. In this entry, young readers learn about the childhood and accomplishments a well-known tennis champion.
Young Evonne grew up in Australia at a time when there was prejudice against the indigenous population. She was raised in a family of eight children where money was scarce but…one day she found a ball and her lifelong passion for tennis.
The author tells readers that Evonne was not allowed to play on the court in her community. She stood outside to listen and learn until one day someone gave her a key so that she could practice on the court at night.
From this beginning Evonne was “discovered” by a coach and moved to Sydney. She became a successful player who remembered her family’s advice to enjoy the game. Evonne won many championships and was the first mom to win a major tournament at Wimbledon.
The illustrations in this book are so cheerful and the story of Evonne is inspiring. I recommend adding this title to your home or school library.
Many thanks to NetGalley and the publisher for this title in exchange for an honest review.

When she retired, Evonne kept inspiring the next generation of Australian tennis players, helping young Indigenous children make it onto the court. And this is how little Evonne became the most graceful player the world has ever met. A living legend who breaks barriers every time she hits the ball.