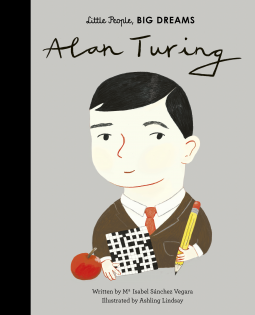 The story of Alan Turing is beautifully told in this new title in the Little People, Big Dreams series. Nothing is glossed over as the story is told not only about the breaking of the Engima code but also Turing’s being gay and the way that he was treated in England.
Readers of this title who may feel a bit alone or different will be encouraged by learning about all that Alan did, after he faced the loss of a person very important to him. This book could be a great jumping off point for talking with a child.
Alan’s story is told in a matter of fact style. The illustrations are lovely, expressive and greatly enhance the text.
Many thanks to NetGalley and the publisher for the opportunity to read a book in one of my favorite series.

Little Alan was a boy from London who grew away from his parents. He was so shy and inward that nobody expected much from him. But sometimes that’s just the kind of people who do the things no one can imagine.

Mathematicians, chess players, engineers,… they all failed trying to defeat Enigma, the wicked code machine built by the Nazis. Alan knew it was not a human mind, but another machine what they needed to beat it.