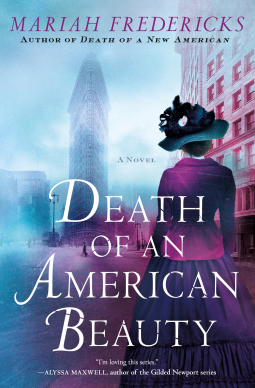 This is the third entry in Ms. Fredericks’s historical mystery series featuring ladies maid, Jane Prescott.  The novels are set in New York in the early 1900s, with this story taking place in 1913.

I read last year’s title, Death of a New American, which I enjoyed so I was excited to receive an ARC of Death of an American Beauty.  This time Jane plans on taking a break from her ladies maid duties and intends to start by taking in a bit of culture.  She wants to attend an exhibit of the (radical) new artists of the Cubist movement. However, life does not always go as planned and instead Jane becomes involved in another murder investigation. Someone is murdered outside the home where Jane grew up.  Jane’s uncle, who runs a refuge for former prostitutes there becomes a suspect.  Jane naturally becomes involved in the case wanting to clear her uncle.  She is helped by her friend, the reporter, Michael, a character known from the previous book.

Fans of historical mysteries should enjoy this title.  The author does a good job creating an engaging situation for Jane.  Note that this title can be read as a standalone but the other titles in the series are also worth picking up.