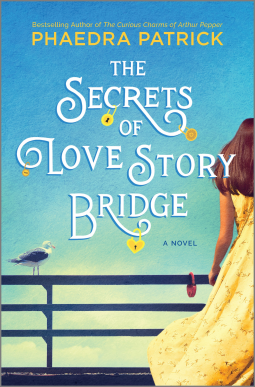 The Secrets of Love Story Bridge is a warm-hearted tale of flawed yet hopeful individuals who find one another and move forward in their lives. The main character is Mitchell; he is a man with many regrets for how he lived his life with his partner Anita. Now he is finding it difficult to move ahead without her. A workaholic, Mitchell was often missing out on day to day life with Anita and their daughter, Poppy.

As the novel opens, Mitchell and nine-year-old Poppy form a tight (but somewhat rigid) twosome as Mitchell tries to control for all eventualities. Mitchell tries to maintain his connection to Anita by writing letters that she will never read. He cannot get himself to read the last letter that Anita wrote to him. Full of guilt, will Mitchell ever forgive himself?

Mitchell lives in Upchester, a town of many bridges. One day he sees someone leave a love locket on the bridge and then go overboard. He rescues this unknown young woman and this starts a period of change in his life. Who went over? What happened to her? How will the private Mitchell cope with the ensuing publicity?

Mitchell was late to pick up Poppy on the bridge day so she was with a teacher, Liza. The story of Liza and Mitchell will be the romance that you root for. Readers will also learn about the connections between the woman on the bridge and the other characters in the novel.

This is a story of quirky characters who want what most of us want-a sense of connection and hope for the future. In that sense, bridges that connect two places, form the perfect analogy for the novel. During our current difficult times, this is a sweet book and may help readers to take a break from their worries.

An interview with the author:

Would you tell us what inspired you to write about “love story” bridge?

The idea came to me after I noticed padlocks hanging on bridges, everywhere from my home city of Manchester, England, to Gran Canaria. I was aware of the famous Pont Des Arts bridge in Paris that collapsed under the weight of ‘love locks’ several years ago, and it made me wonder about who hung them there and what the stories were behind them. I had a picture in my head of a man whose job it was to remove the locks, and that he’d probably had his heart broken in the past. I called him Mitchell Fisher after the street my grandparents used to live on, Mitchell Street.

Which character do you most relate to and why?

I have a real soft spot for a minor character in the book, Carl. He’s the concierge of the apartment block that Mitchell lives in. Carl is a real trier in life and never gives up. He’s amiable, eager to better himself and can often be found making origami shapes out of paper. He was a joy to spend time with.

What challenged you the most while writing this story?

Sometimes, when I start a book, I have a small idea in my mind but don’t know the entire story. With The Secrets of Love Story Bridge, I had an image of a man on a bridge who saves a lady in a yellow dress from drowning in a river. But that was all! In the book, the lady in yellow subsequently vanishes, but I had no idea why and where she went to! It was a real challenge to try and work out her story, and I only found out her secret at the same time Mitchell does.

What was something interesting you learned while compiling research for the book?

I was amazed at how widely spread across the world hanging love locks is.  Research taught me that some people believe it’s a ritual that stems from ancient Chinese tradition, whereas others believe it started in a small Serbian town during the First World War. Wherever it originated, it’s something that’s still going strong today.

What’s one of your hobbies or something we might not know about you?

I sometimes make my own dresses. I made a floaty cornflower blue one to wear on my birthday last August, and am currently making a bright coral one as a quarantine project. When the coronavirus lockdown ends, I’m going to wear it when I meet my friends for pizza and cider. I studied art at college and was brought up by creative parents, so I dabbled with sewing, mosaics, painting, etc. at an early age. I wouldn’t say I’m brilliant at dress making but it’s a nice way to relax after writing all day.

Where do you get your ideas?

I usually just think about things I’m passionate about, am interested in, or have experience with – places, objects, professions, etc. Then I see what will fit nicely together. For The Secrets of Love Story Bridge, I wanted to write about an English city, and my favourite season is summertime. I used to work for a locksmith company and so had an interest in padlocks. My teenage son is learning how to play the guitar, so one of the female characters in the book became a music teacher. Each of my books takes influences from my own life and mixes them together to form something unique.

I write full time, but do try to pencil in a weekly lunch with my parents, and catch ups with friends. Writing can be a solitary profession so it’s essential to keep in touch with people, even if that’s only online. I’m fortunate to be still in touch with ex-colleagues from my previous jobs, and also with fellow writers. After walking my dog, I’m usually at my writing desk by 8.30am. I work from a small shed in my garden with a lovely view of the countryside. I try to get my admin out of the way first, which can sometimes take all morning. And then I start writing.

What advice do you have for writers?

Keep going. Often the difference between an unpublished writer and a published one isn’t the quality of writing, it’s determination and not giving up. I had lots of rejections and tried to see them as hurdles rather than roadblocks. If agents gave me advice, no matter how small, I listened and strengthened my submission accordingly. Then I kept on going. I wrote six or seven books, all rejected, before I signed with my agency. They even turned me down twice, but I didn’t take it personally. I joke that ‘I wore them down eventually’ but, really, I worked hard and wrote the story I wanted to tell. I like to pass on what I’ve learned to other writers, so have published a free A-Z of writing tips on my website www.phaedra-patrick.com/writing-tips

What is the first book that made you cry?

I honestly can’t think of the first book that made me cry, but I do remember sitting down on my kitchen floor crying about my own writing! I’d written six or seven books which received good feedback from agents, but I was told repeatedly that the market was saturated. My tears were ones of frustration, that I wanted to write but couldn’t pick the right story that would get me a publishing deal.

I’d read the book Q & A by Vikas Swarup, which was made into the film Slumdog Millionaire. The idea was so simple and absolute genius, about an orphaned, illiterate boy who is arrested for winning the Indian version of Who Wants to be a Millionaire. The story tells of how he knows the answers to each of the questions one-by-one. I took inspiration from the idea and eventually wrote The Curious Charms of Arthur Pepper, which became my debut published novel.

My first two books, The Curious Charms of Arthur Pepper, and Rise & Shine, Benedict Stone feature male characters, mainly because I’d written about female characters several times before without getting published. So, I decided to try something different and to challenge myself by writing about the opposite sex. I think men are more private with their emotions and so you can peel back the layers of their character like an onion, exposing more layers. They tend to use less words. With regard to female characters, I want to write about ones that other women can relate to and cheer on, as was the case in my third book, The Library of Lost and Found.

What is your writing Kryptonite?

My iPhone! On those days when I’m not in the mood to write, or the words won’t come through freely, it’s so tempting to reach out for my phone and procrastinate. Social media, answering emails, and even doing my accounts can take a huge chunk of time out of my day. Sometimes I put my phone on a high shelf so I can’t reach it, and I’ve also been known to leave it inside my house while I work in my shed.

Have you ever gotten reader’s block?

Yes, all the time. I read best while I’m relaxing around a nice hotel swimming pool while on holiday, but that only happens once or twice a year, if I’m lucky. I try to read each night before going to sleep, but my teenage son likes to chat about his day, so I often end up putting my book away. I read quite a few novels that I admire and enjoy the writing but the story doesn’t grab me. However, I always love reading non-fiction books about the art of writing, structure, storytelling, plotting and dialogue. I have around 40-50 of them in total and they’re always inspirational to dip into. I’ve even been known to take them on holiday with me, too.

How did publishing your first book change your process of writing, if at all?

I was working for a large UK co-operative in marketing and communications when I wrote The Curious Charms of Arthur Pepper. I used to think of ideas for the book as I walked to the train station, and I jotted them down on my commute into work. When I found time to write, it meant I wasn’t staring at a blank computer screen and had lots of notes and ideas to work from. The novel took me eighteen months to write in total. Now, I’m in the fortunate position to be a full-time author, and I treat it very much as a full-time job, working five days a week.

What kind of research do you do, and how long do you spend researching before beginning a book?

I usually focus on what I know, so don’t conduct much research before starting to write. My second novel required the most exploration. Each chapter of Rise & Shine, Benedict Stone started with the name of a gemstone and its properties, for example, white opals are supposed to help with hope, desire and fidelity. The book has thirty-seven chapters, so I had to find out rather a lot about gems!