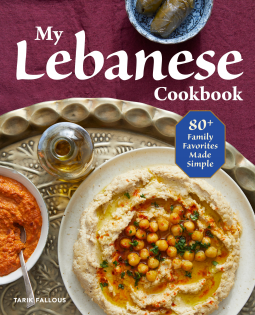 I have been busy traveling the world via cookbooks.  It has been a great adventure as, in reality, I am stuck at home.

This title includes more than 80 recipes that are of Lebanese origin.  The book includes recipes for breakfast, mezzes, salads, fish and shellfish dishes, meat and poultry recipes, side and vegetable dishes and breads and desserts.  There is also an instructional chapter called basics and sections including a glossary, resources and menus for entertaining.  Just a few of the recipes that I would like to try include fatet hummus/savory chickpea bread pudding, fried kibbe stuffed with spiced beef and pine nuts, yogurt cucumber salad, fish with spicy tahini, baked kafta casserole, and zucchini and chickpea stew.  After all that I would like to have Lebanese bread pudding or a spiced rice pudding.  Yum.

In my opinion these recipes are not for absolute beginners but they are intriguing and worth the effort I expect.  Many thanks to NetGalley and the publisher for this title in exchange for an honest review.

This Lebanese omelet is cooked is filled with fresh parsley and is served flat rather than folded.

2. In a large bowl, whisk together the eggs, parsley, onion, flour, salt, pepper, and cinnamon.

3. Heat the oil in an oven-safe skillet over medium heat for 2 minutes.

4. Pour in the egg mixture, and immediately transfer the skillet to the oven. Bake until the omelet has puffed up and set, for about 15 minutes. Remove from the oven. Serve immediately.