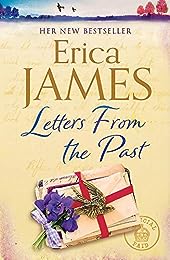 Each year when a new novel by Erica James is published, I cannot wait to read it.  Ms. James develops wonderful characters and places them in settings where I enjoy spending time.  I knew even before reading the description that I wanted to read Letters From the Past.  Until the book arrived, I did not know that it is a sequel to her earlier novel, Coming Home to Island House (see review below).  If you decide to read both novels you will be kept busy as I think that in total you will have 800 pages or more…but if you want escape, go for it.

Letters From the Past features many of the characters from Coming Home to Island House about twenty years after the events of the earlier novel.  Readers will learn more of their backstories including their experiences during WWII and in the 60s.  The younger generation also takes a more prominent role in this book.  For all characters relationships are explored both romantically and as family and friends.

Around the immersive stories of the characters, there is trouble in the village.  Someone is sending poison pen letters.  Who?  Why?  How will they change lives and engender mistrust?

I liked just about everything about this novel and was sad to come to the end.  My only criticism is that Arthur, the villain, is portrayed in a way that feels too one dimensional to me.

Come to Island House indeed.  Then find out what the Letters From the Past are.  If you enjoy women’s fiction, I suggest making these titles a priority.

For American readers, I think these titles are available through Abebooks.com or a UK store.

My review of Coming Home to Island House

Erica James has written many novels. In each, the reader becomes absorbed with the characters, settings and actions of the people who come to life. In Coming Home to Island House, the time is 1939 and the outbreak of WWII. Independent and a writer, Romily has finally become invested in a relationship. Older than Romily, Jack Devereux, respects her and does not want her to change. No real spoiler, because this happens early in the novel, but Jack dies leaving Romily to live in the beautiful Island House. Also coming to Island House are Jack’s children, including a niece whom he adopted. Arthur is self-centered and not very likeable, while his brother Kit seems very much his opposite. Hope has been widowed and is the guardian of her baby niece, who was smuggled out of Germany because of being part Jewish. Last, there is Allegra who began life in an Italian orphanage, only to begin living with her uncle Jack. Each of these main characters has hopes, dreams and relationships that the reader follows in the book. There are also some below stairs folk, people in the village and a young British evacuee, among others.

Ms. James moves among the characters, giving readers the chance to get to know them well. If you enjoy a family story and like to immerse yourself in a long novel, consider this one. It was published in Britain but can be ordered through sites such as abebooks.com.