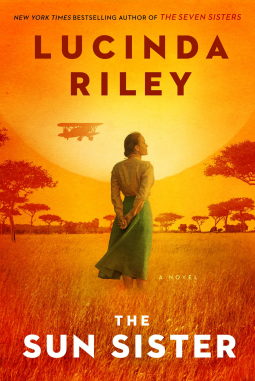 I was absolutely thrilled to be given an ARC of this title by NetGalley and the publisher. I have looked forward to and read each book in this series, beginning with the first titled, The Seven Sisters, followed by The Storm Sister, The Shadow Sister, The Pearl Sister and now The Sun Sister. There is still a seventh to come.

The conceit of the series is that Pa, who may or may not be deceased, adopted seven children from around the globe. In each novel in the series, which can be read in any order, one of the sisters learns more about her past. Each book has a dual time line. In the order listed for the books above, Maia’s story lies in Brazil, Ally’s in Norway, Star’s in England, Cece’s in Australia, Tiggy’s in Spain and Electra’s in Africa. Each book has been researched for historical veracity. The books are LONG which to me has been a plus as I love to spend time with Ms. Riley’s characters.

In some ways, I think Electra’s personal story is the most difficult. Readers learn early on that, although Electra, is a world famous model, she is personally somewhat lost and struggling. The beginning of the novel places the reader in the world of Electra’s addictions. Readers will watch and hope for her recovery.

Electra’s birth grandmother’s story begins in Africa where, for reasons the plot explains, she comes to be cared for by Cecily. Cecily, an American, has traveled to Kenya where she lives with characters much like those in the “Happy Valley set.” Some sections of the story take place in Kenya and then the story moves to New York when Cecily returns there for a time.

Ms. Riley is taking on big issues in this novel; addiction, race relations, prejudice and more. I think that this makes the book a more challenging one for the Caucasian author as she is trying to authentically portray relatively recent times for African Americans while not having grown up with these experiences. However, that said, I very much enjoyed spending time in the world of the Seven Sisters.

Many, many…many thanks to NetGalley and the publisher for this title in exchange for an honest review. I enjoyed seeing the ways in which Electra evolved over the course of the novel.