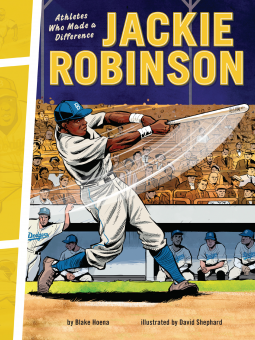 This graphic novel tells the story of Jackie Robinson from the time of his birth as his parents fifth child on through his many achievements and challenges. This title tells Mr. Robinson’s story well.

The author notes that Jackie’s early years were marred by the racial tensions in his town and the absence of his father.  Still, one place where he was comfortable and excelled was a ball field.

The book goes on to follow Jackie as a teen when both he and his older brother, an Olympic athlete, excelled at sports. Jackie  played football, basketball, baseball and track.  However, his life and education were disrupted by WWII and the continued racism that he faced.

The author acknowledges the many achievements of Jackie Robinson as he played baseball in the Negro Leagues and eventually played as the first African American on a previously all white major league team.  Jackie played to jeers from many in the crowd but persevered.  He was truly a gifted athlete and man.

This moment in time seems like a perfect one to remember and honor Mr. Robinson.  Many thanks to NetGalley and the publisher for this title in exchange for an honest review.