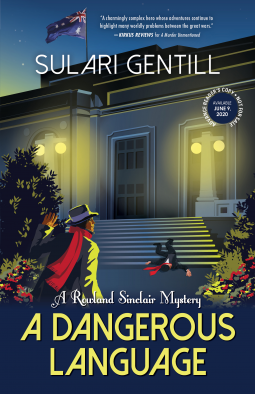 Sulari Gentill has authored a number of books in an historical mystery series set in 1930s Australia. It is a time when there is much unrest; on the one side is the New Guard, a Fascist group, while, on the other, there are the Communists, among others. Historically, WWII is coming and tensions are high.

Ms. Gentill uses this time period to good effect in her mysteries which feature a mix of fictional and historical characters. In this one, the historical figures include a number of politicians and readers spend time at the new Parliament building. One does not have to stretch very far to find some parallels with our own uncertain times. There is a quote that relates to the story’s title and those (and our) times. It is “The dangerous language you speak of is the truth.”

The series in general and this novel feature family dynamics, political intricacies, murder, chases, romance and suspense. Readers familiar with the series will be delighted to spend time with main characters Rowly (a kind of Lord Peter Wimsey if Wimsey were more on the left), poet Milton, painter Clyde and the female sculptor, Ed. There is a new character as well, a woman with whom Rowly had been in love as a teen; will she take Edna’s place in his affections? Readers will also find that Wilf, Rowly’s brother, makes an appearance and the two seem as fractious as ever.

A lot happens in this novel. A communist is killed on the steps of Parliament. Egon Kisch, an anti-Fascist (a true historical figure) who wants to speak in Australia may not be allowed in the country; how will he and Rowly intersect? There is an unidentifiable young woman who is found murdered early in the novel; who is she? There is a famous air race and more. The novel is busy but it works.

Each chapter opens with a fictitious newspaper account. These add a sense of veracity to the book and parallel some of what happens. series.

I enjoy Sulari Gentill’s novels more each time that I read them. I highly recommend this one.