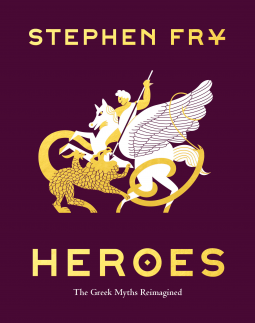 I have known Stephen Fry as an actor, having watched an enjoyable series called Kingdom in which he starred. He is also a man with lots of personality. More recently, Mr. Fry has turned his hand to writing. A prior book of his, Mythos, was well received. Now we have this new book which re-imagines a number of Greek myths.
Eight heroes have their stories told here in a series of short chapters. The characters are Perseus, Heracles, Bellerophon, Orpheus, Jason, Atalanta, Oedipus and Theseus. Before starting on his tales, Fry includes helpful resources such as maps and a family tree of the Olympians. There are some helpful entries at the end of the book including a list of characters, monsters, mortals and more.
The book’s introduction sets the tone. The style is conversational and engaging. It is written in a present tense. Frye tells his stories well and with a sense of humor. The text is beautifully illustrated with many paintings.
If you would like to relax and have someone tell you a story, you should enjoy this title. I am eager to see the print copy.
Many thanks to NetGalley and the publisher for this title in exchange for an honest review.