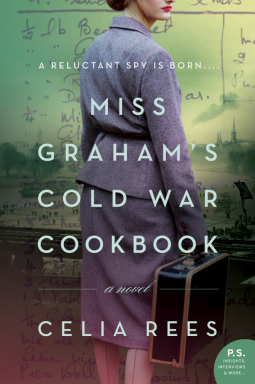 I will start by saying that I highly recommend this title which is a story of Germany in the aftermath of WWII. Set in several countries, including Britain, Germany, Italy and Switzerland, it is the story of the titular Edith Graham. As the novel opens, Miss Graham is an educator living at home with her mother, a life that she found somewhat dull and meaningless. When she is offered the opportunity to go to Germany to help with the re-establishment of educational facilities, she is really for the change and challenge. But…much more is in store for Edith.
Readers learn that, before the war,Edith was in love with a handsome, smart, German man named Kurt. Miss Graham also became close to his wife Elisabeth. What happened to this couple during WWII? How did they survive? What did they do? What happened to them afterwards? Their story line forms a large part of the narrative.
Around Edith are various agents, each with their own, and sometimes overlapping, agendas. There are Dori, Vera and Adeline for the women, each of whom has been shaped by their wartime experiences. In addition, there are the men; they represent the U.S. and the British. What are their agendas? How will these intersect with those of the women?
There is espionage here and, after a slightly slow start, a book that had me turning the pages and connecting with the characters. In addition to an excellent plot, the book raises a number of issues: what was life like for the Germans as the Americans, Russians and British entered their defeated country? How do people survive when they have nothing, not even food? Do ends justify means? Who can be trusted? Can there be justice in a world that has been turned upside down?
As readers follow the story, each chapter begins with an entry from Miss Graham’s Cold War Cookbook. Readers will learn the significance of these menus as they become involved with the novel.
I have read many books of historical fiction about WWII. This one is a bit different in that it largely takes place after the war. It is a compelling read and one that I recommend most highly. I give it five stars, something I do not often do.
Many thanks to NetGalley and the publisher for this read in exchange for an honest review.