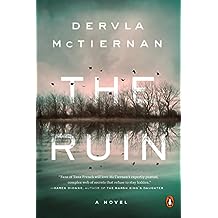 The Ruin is a first novel by an author who is Irish and currently living in Australia.  Readers who know Tana French will think of her when they read Dervla McTiernan’s book.

A brief plot synopsis:  A detective had a case twenty years ago that involved two children who were not adequately cared for.  In the present, that little boy, now an adult dies.  What happened?   Was it murder? Why?  Is his sister involved?  Guilty?

The story is involved and complex with multiple characters.  They are well drawn, have personalities and evoke reactions in the reader.

I finished this  novel already looking forward to the next in the series.  One small criticism;  the author includes so much, maybe too much in the final solving of the case.

This novel gets 4 plus stars from this reader.  Other opinions below:
“A gripping mystery set in Galway that spans twenty years. It’s a complicated page-turning story that touches on corruption, clandestine cover-ups, and criminal conspiracy. . . . A story that’s as moving as it is fast-paced.”
—Daily Mail (London)
“Powerful . . . McTiernan neatly ties [the threads of the novel] all together in the suspenseful conclusion. McTiernan, born in Ireland but now living in Australia, is a writer to watch.”
—Publishers Weekly (starred review)