The Night Hawks by Elly Griffiths

Elly Griffiths is currently writing three different mystery series. There are the stories (historical) set around Brighton and the Harbinder novels in addition to those about Ruth, Nelson, Michelle and those around them. While I would happily read anything that Ms. Griffiths writes, I admit to a special soft spot for the stories about Ruth. Last year’s book featuring her as been nominated for the Theakston Old Peculier Crime Novel of the Year. I hope she wins.

A lot going on in this title. There is a mysterious and scary dog who apparently lives in a pretty horrible house in the middle of nowhere. Unlike with Holmes, this dog does bark but it is unclear why he is frequently sighted and to whom he belongs. He does terrify people though.

The farm where this beast has been seen is the site of two deaths. Was there a murder/suicide or was this a crime committed by an outsider? The murdered doctor is a singularly unlikable character. He has intimidated his wife and children and has been doing some mysterious research with fatal results. Which unsavory aspect of his life led to his demise?

The Night Hawks of the title are a group of men who go hunting for metal objects. Their finds include bodies, both historical. Some of these men have connections with the doctor and his family. Does that make them suspects?

Ruth also has a new colleague with whom to contend. What is in his past? Will Ruth rue having hired him? Where will he fit in the events of the story?

Around all of this, are Ruth, Nelson Kate, Michelle and their relationships. Where will they be by the end of the book?

Readers who are fans should absolutely rush out to get this 13th title in the series. I recommend it highly for its local geography, the people and the story itself.

Many, many thanks to NetGalley and the publisher for this title. All opinions are my own.

All the Devils are Here by Louise Penny-Audio Book 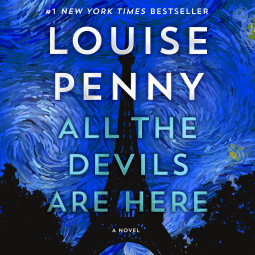 I’ll start by commenting on the audio.  The book was extremely well and engagingly narrated.  I was constantly stealing time to listen to just a bit more.  The narrator’s tone is just right and he captures each character’s voice in a unique way.

The story itself will be very welcomed by series readers although new readers could also enjoy it.  Readers learn so much backstory about Armand Gamache including SPOILER? the loss of his parents and the roles of his grandmother and godfather in his life.

The setting for this title is a fully realized Paris where the Gamaches are visiting their son, daughter and their spouses and children, all of whom now live there.  Armand also spends time with his godfather.  I loved the opening scene at the Rodin Museum.  Having visited there, I enjoyed my virtual return.

Just who is Stephen Horowitz?  What has he done?  Who wanted to harm him?  What does it mean to be in a family? What are the responsibilities of corporations? What does loyalty mean?  Can we protect those we love?  These questions and more are raised in this thoughtful, deeply moving mystery.

I recommend this title most highly.  I now plan to go back and read or listen to all of the books again.