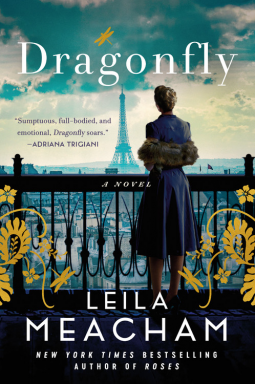 So many historical fiction titles on WWII have been published.  I think that this has to do with many important anniversaries and commemorations and perhaps also because it was a war in which the right thing seemed clear.  As a result, it seems that some look back on the war almost nostalgically even while noting and recalling its enormous tragedies.

So, I wondered if I wanted/needed to read another title set in this time period.  I will emphatically say yes (!) as I very much enjoyed Dragonfly.  In my opinion, this is by far the author’s bests book.

Dragonfly tells the story of five people who are recruited as spies in occupied France.  The backstory of each character is fully explored and I cared about each of them.  These characters are an athlete from Texas with German roots, a young man whose biological father turns out to be an important fighter in the French resistance, a fly fisherman, a fashion designer and a fencer.  Three are men and two are women.

Each is embedded in Paris and interacts with the main German characters in the story, some of whom are described sympathetically.  Code named Dragonfly, the team gets to work.  There is much suspense as they do so and this aspect of the story is handled beautifully by the author as the plots and characters intersect.  At times, I truly worried for these characters especially as the beginning of the book states that one of them may well have died while on their mission.  The suspense is indeed suspenseful.

I highly recommend this title for those who would like to sink into a long (577 pages) and absorbing story.