So happy to be part of the blog tour for this title. I advise putting this one on your reading list!

Many thanks to Algonquin for this opportunity.

About the book and more:

“The brilliantly rendered mise-en-scène of quarrelsome, ego-ridden yet touchingly fragile poets and the literary entrepreneurs who circle around them makes a vivid backdrop for this classic coming-of-age tale. More thoughtful, elegantly written fiction in the classic realist tradition by the gifted Thompson.”
—Kirkus Reviews (starred review)

THE POET’S HOUSE
By Jean Thompson 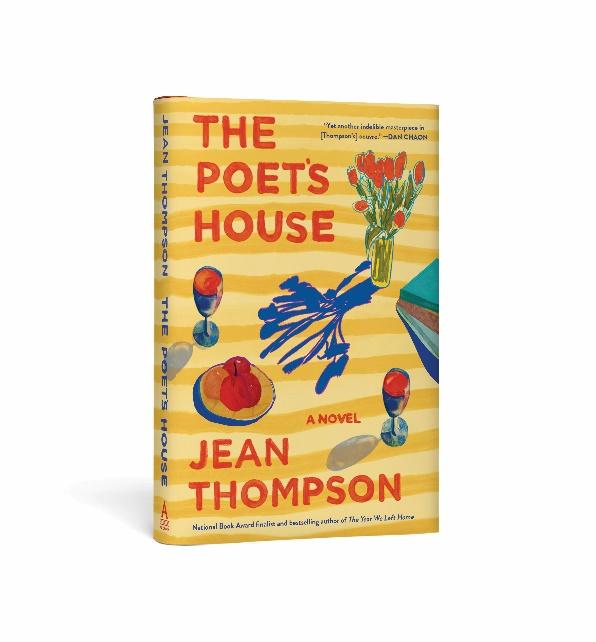 “Ever insightful, imaginative, compassionate, and funny, Thompson is a virtuoso of thorny interactions between wholly realized characters rife with contradictions. And she is so in her element, bringing this richly dimensional book-anchored mise-en-scene to life with lacerating wit and rueful tenderness while adeptly interleaving a poet’s long, covert battle against sexism and regret with the verdant tale of a young woman taking root in an unexpectedly sustaining realm.”
—Booklist (starred review)

“Jean Thompson makes hanging out with poets look like even more of a good time than one suspects, in real life, it might be. The Poet’s House is terrific company: funny, poignant, and full of realistically quirky and original characters. A thoroughly enjoyable read.”—Julie Schumacher, author of The Shakespeare Requirement

“A coming-of-age novel, a novel of manners (Jane Austen, make some room on that big bench, dear), engaging, a page-turning narrative, laugh-out-loud scenes, and ultimately a hopeful affirming book about how words can stir the mystery in us, help us find ourselves, and maybe even make us, however reluctantly, bigger versions of ourselves.  The Poet’s House is a book I’ll be recommending to my friends who are readers and even to those who are not, but who will, to be sure, fall in love with Carla, with her discoveries, and with that master storyteller, Jean Thompson.”
—Julia Alvarez, author of Afterlife

New York Times bestselling author and former National Book Award finalist Jean Thompson has long been considered one of our most celebrated literary novelists. The author of fourteen works of fiction and the recipient of Guggenheim and National Endowment for the Arts fellowships, Thompson is known for her graceful and beautifully crafted writing, which has been compared to both Alice Munro and Joyce Carol Oates. Algonquin is thrilled to welcome this beloved writer to our list with the publication of THE POET’S HOUSE, (Algonquin Books; Publication Date: July 12, 2022; $26.95) a witty, delightfully entertaining novel about a young woman who gets swept up in the dramatic, passionate, and often insular world of writers. Both wry and wise, THE POET’S HOUSE is an insightful look at the literary scene – sometimes petty, sometimes transactional, sometimes transformative – and a coming-of-age story about the paths taken to find one’s true passion.

It has been a long, hot summer in Northern California, and Carla, in her early twenties and working as a landscaper, feels unsatisfied and aimless. When she is hired to work at the home of Viridian, an aging poet, both lauded and lovely, Carla is introduced to Viridian’s eccentric group of friends—and most importantly to the beauty and power of poetry—and her life changes drastically. She becomes enamored with Viridian – whose reputation has been defined by her infamous affair with a famous poet, Mathias – and the complicated dynamics of the art world. She develops a new hunger for words, and for life. As a fight emerges over the last cycle of poems Mathias wrote before he died, Carla gets drawn in. Does she even belong in this world? How much will she sacrifice for a group that may or may not see her as one of their own?

“After a lifetime of authorship, I wanted to pay tribute to the enterprise of writing itself, as well as cast an affectionate eye on some of the excesses and bad behavior that can accompany it,” explains Thompson. “With THE POET’S HOUSE, I hope I’ve achieved a balance between the comedy of the human goings-on, and poems themselves, which can inspire and transform us.” Thompson lives outside of Chicago and has instructed creative writing for decades, including the University of Illinois Urbana-Champaign, Reed College, and Northwestern University.

“Jean Thompson is a national treasure,” says Dan Chaon. “She’s the kind of writer who can make you laugh and cry at the same time. . . [her] work is full of insight and wisdom and a deadly keen eye for the foibles and self-deceptions of her characters. THE POET’S HOUSE is yet another indelible masterpiece in her oeuvre.”

Jean Thompson is the author of fourteen books of fiction, including the National Book Award finalist Who Do You Love, the NYT bestseller The Year We Left Home, and the NYT Notable Book Wide Blue Yonder. Her work has been published in the New Yorker, as well as dozens of other magazines, and anthologized in The Best American Short Stories and the Pushcart Prize. She has been the recipient of Guggenheim and National Endowment for the Arts fellowships, among other accolades, and has taught creative writing at numerous colleges around the country.