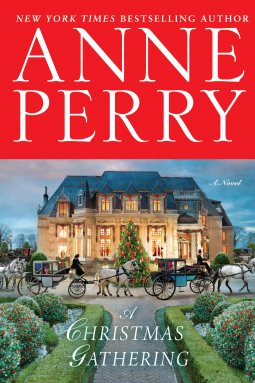 A Christmas Gathering is this year’s seasonal novella written by Anne Perry. This one features two of my favorite Anne Perry characters, Vespasia and Victor Narraway. Fans of the Thomas Pitt series will know these characters well but the book can also be read as a standalone.

Vespasia is a woman of a certain age and she has the beauty and wisdom that those of her age hope for. Victor has a difficult past history; among other jobs, he was the head of Special Branch which dealt with crimes around terrorism and other issues.

The two are invited to a house party over the lead up to Christmas. As it turns out, Victor has a job to do while there although he does not initially tell Vespasia this. Also at the house are the person assigned to pass a confidential report to Victor and someone who is looking to hurt Victor. Victor, himself, is aware of the similarities between this assignment and one in his past when he failed. This failure has troubled him for twenty or more years.

The case is solved in time for Victor and Vespasia to welcome the holiday. Along the way, there is much wisdom dispensed, some of it centering on the need to forgive oneself one’s human failings. In addition there is much wit in this book as Vespasia spars with at least one of the other women in the house party.

This novella is a quick read and one that will be welcomed by Anne Perry’s many readers. Thanks to NetGalley and the publisher for this title in exchange for an honest review.